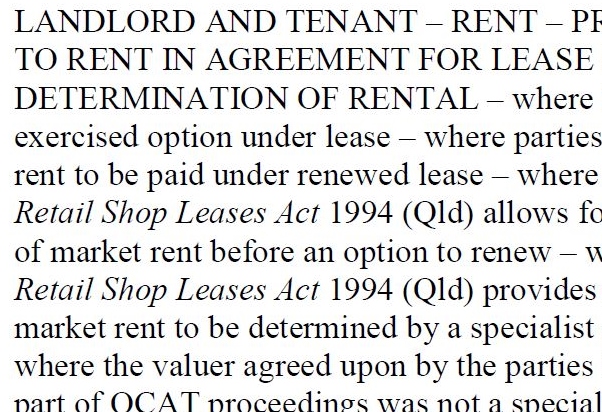 This rental dispute highlights that tenants and landlords cannot contract outside the law (Retail Shop Leases Act Qld), even with agreement between the parties to a particular procedure.

The parties to a Surfers Paradise restaurant shop lease were unable to agree on the rental payable for the first year of a 5 year option. The Lessee had filed a notice of dispute in the Queensland Civil and Administrative Tribunal (QCAT) seeking early determination of the rent payable under the further option. That application, sought a number of remedies, including an appointment by QCAT of an acceptable Valuer.

Later, the parties agreed to jointly appoint a Valuer. The Lessor knew at that time that person was not a QCAT accredited specialist retail Valuer .

The Valuer issued a report and four days later the Lessee subsequently issued notice to renew the Option. The Lessee’s solicitors sought confirmation from the Lessor’s solicitors that the notice exercising the option had received

“We have obtained our client’s instructions on your below email and advise that we are currently in the process of preparing the necessary documentation which will be forwarded in due course. …”

A few months later, the Lessor’s solicitors wrote, among other things:

The Lessee then applied to the Supreme Court seeking declarations that:

(a) it validly exercised the option to renew, and

(b) the rent payable for the first year of the further term is $160,000 plus recoverable outgoings and GST (as per the Valuer’s report).

The Lessor conceded the Option to renew was validly exercised but disputed the “Determination” validity.

Section 27A sets out a regime under which the market rental can be the subject of an early determination in order that a lessee may decide whether or not to exercise an option to renew. The mechanical provisions are provided for in s 28. The Act prevents, through s 19, parties from contracting out of those provisions. In the light of the authorities referred to above, the conclusion is inescapable that the respondent cannot be estopped, nor can it be said to have waived its rights under this Act. For the reasons given above, then, the assessment made by Mr (deleted) does not accord with the requirements of the Retail Shop Leases Act 1994 and so has no effect. Before a lease document can be capable of registration it requires, among other things, that the amount of rent be included in the document.11. As the rental has not been determined, then the respondent (Lessor) cannot deliver up a lease in registrable form.

We understand the rental was later properly Determined by a suitably qualified Specialist Retail Valuer at approximately $200,000 pa net +outs +GST i.e. 25% above the earlier ‘Determination’

Notwithstanding the above, the Retail Shop Leases Act states:

19 Contracting out of Act prohibited
A provision of a retail shop lease is void if it purports to exclude the application of a provision of this Act that applies to the lease.

Disclaimer : This publication is intended only to provide a summary of the subject matter covered. It does not purport to be comprehensive or to render professional advice and neither purports nor is intended, to be advice on any particular matter. No reader should act on the basis of any matter contained in this publication without first obtaining specific professional advice. This article is copyright. For permission to reproduce please contact us.